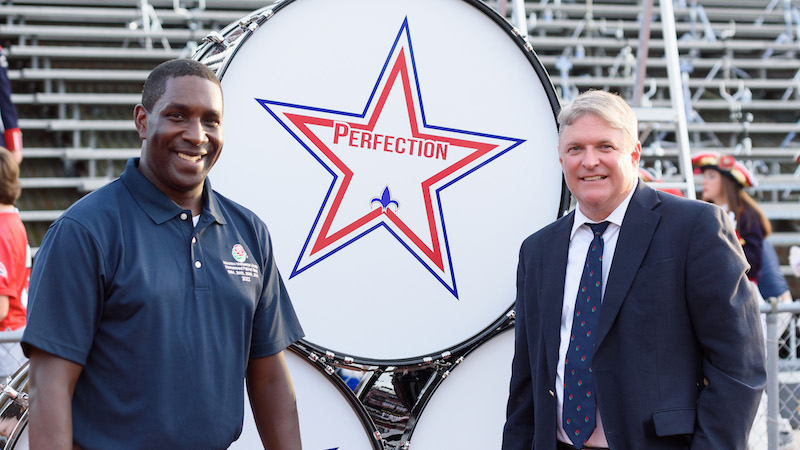 The Homewood Patriot Band is all about tradition. From the year it debuted in 1972, the school system wanted it to be its shining star, with its All American band uniforms and Rockettes-like dance line, the Star-Spangled Girls. Before long, they were marching in New Orleans in a Mardi Gras parade, and while there, one of the promoters of the Macy’s Thanksgiving Day Parade saw them and said, “We’ve got to have that All American band in our parade.” And soon they did.

Just shy of 50 years later, the band has built on the tradition it started back in 1972 and added cases and cases full of trophies marking all of their contest wins and parade invitations. What has changed the most is its size. At 420 members strong—about a third of the Homewood High School student body—the Homewood Patriot Band is the largest in the state.

The band has nearly tripled in size since Ron Pence started as its director in 1996 and Chris Cooper started as his assistant three years later, and there’s no doubt that growth is strongly tied to their leadership. Last school year, Pence retired after 33 years of directing bands, and Cooper stepped into his role and Terrance Cobb into Cooper’s previous role as his right-hand man. To learn more about the band’s traditions and what’s on deck this season as the band prepares to play at its fifth Rose Bowl Parade, we chatted with Cooper just after the band was formally invited to play the Rose Bowl by Rose Bowl President Bob Miller at the Homewood vs. Vestavia Hills game on Aug. 27.

“Friday night was a neat moment for (Ron Pence) because he got to see his best friend—we are best friends and live across the street from each other—do all the ceremonial things for the Rose Parade,” Cooper says about that night. “Ron sent me a nice text about how proud he was of me. I am not going to the Rose Parade without him; he will be right there with me.” 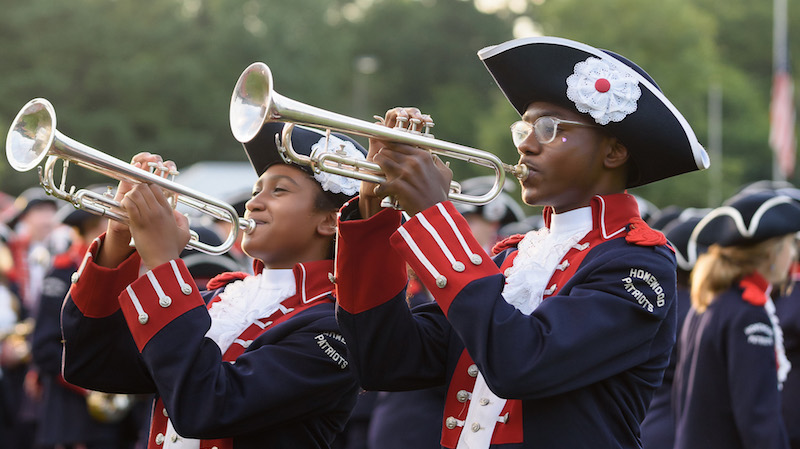 Can you tell us about your road to Homewood?

My first job was in Foley, Alabama, and Ron Pence hired me. It was a great match. We stayed for three years, and we grew the band from 140 to 250. We had bigger dreams than the Foley system, so we both decided to leave at the same time. He came here to Homewood in 1996, and I went back home to Orlando where my dad was the band director. He had the largest band in the state of Florida at West Orange High School. It just so ended up that he passed away from cancer when I was there, and to me it was a God thing that I was there and got to say bye. Before he died he saw Ron at an All State competition in Alabama, and he said, “You and Chris need to work together again and finish what you started.” The position as his assistant and leading the middle school in Homewood came up in 1999. Ron knew we needed to be together.

How has the band grown since you started in Homewood 22 years ago?

Numbers were way down in Homewood in the late ‘90s. We were marching 130 students when I started. The year before I got here 17 kids came up from eighth grade to ninth grade, and you can’t sustain a band with that. After my first year we brought up every student—62 kids—from eighth to ninth grade. We started with 60 sixth graders in 1999, and by the time they were in eighth grade we had 75. That was one of my goals, to get more kids in the high school band. Now one in every three kids in the high school is in the band, and we brought up about 125 students from eighth grade to ninth grade this year. We caught onto something—the philosophy of our band is fun, fun, fun!

Students can participate in band AND a sport in the same season at Homewood High School, right?

One thing we do at Homewood is let kids be in everything. The president of the band this year is also captain of the volleyball team. They don’t have to choose, and everywhere else they do.

When you started at Homewood in 1999, the school hadn’t been to the Rose Bowl Parade since 1984. What made you want to go back, and where did the band’s journey go from there?

The Rose Bowl is on worldwide TV. It’s a trip the kids will never forget. The parade is very difficult—it’s 6 miles whereas Macy’s is 3 miles. Right after the 2000 Macy’s Parade, we went to the inaugural parade in 2001, and that’s when Ron and I started checking off boxes. We went back to the Rose Bowl in 2003 and then again in 2009 and 2014. We get to do these things because of our uniform and how good we are and the things Pat Morrow—the band director from the 1970s to 1990s—put in motion. We said, “How can we keep it going?” 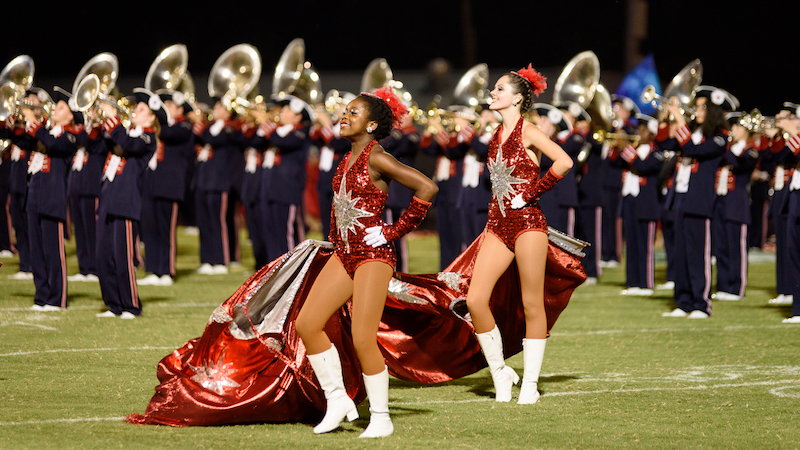 You have two Homewood graduates on the band staff now. Who are they?

We hired Ryan Murrell, who graduated from Homewood in 2003, two years ago. He was about to take over Gadsden High School, but I called him to be an assistant. It took him about three seconds to say, “I’m there.” Everywhere he had been he tried to replicate what he had experienced at Homewood, but he said it can’t be replicated. Lauren Bearden is another assistant who was a drum major here. We wanted Homewood people in leadership who know our traditions.

Our look is very distinct. Most bands get new uniforms every six to eight years and change their look completely. Our look has been the same since 1972, and they love that patriot look that we bring.

A notable moment in the half time show is when the whole band turns from facing the visitor’s side to the home side and starts playing. Has the band always done that?

It’s always going to be in our show, and we started it about eight years ago. We want to blow the house down. Dr. Bill Cleveland used to say, “I love it when y’all turn around in the first part of the show. I know it’s coming, but it’s just the best feeling.”

Is there anything new the band is doing this year?

One thing I wanted to do was bring back more traditions, and I asked parents who were in the Homewood band about it. For the first time in 25 years we are now doing a pregame show before the game starts. We come out on the field, play the Alma Mater and the “Star Spangled Banner,” and form a tunnel for the football team and cheerleaders to run through. We are bringing back an Olympic fanfare they used to play after touchdowns, and one of the football coaches asked me to bring it back. 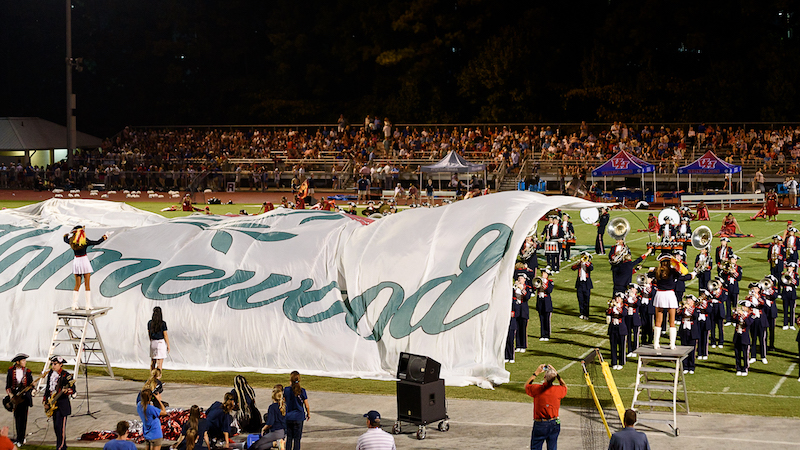 What else are people seeing from the band this season?

I am always thinking about how we can make band, football and cheerleading together. Someone donated three large bass drums, about 7-8 feet high. We are calling them hype drums. When we score, one of the lettermen who paints his chest runs down and hits the drum, and we all go crazy. It’s bring all of us together like at a college game. It’s a tradition we are starting. This year we also started our halftime show with a sound like the Dolby Digital sound on speakers. The crowd went nuts as our announcer came on. He has an iconic voice, and we take him with us to the Rose Parade. Nobody brings their announcer except for Homewood.

Tell us about this year’s half time show.

I wanted to do a show for Ron Pence. We are performing his favorites and calling it “Homewood Tradition.” We open with “Star Trek,” and “Big Noise from Winnetka” is our Star Spangled Girls feature. We end it with “Malaguena.” It’s pure energy. We changed the ending in what might turn into a tradition ending for us. Jacksonville State does that; they have a signature ending that they do.

What else is unique about the show this year?

We always pull over a flyover banner at the very end just before the last big note, and we started putting “Homewood” on it. This year it has the flower from the Rose Bowl logo and the word “Homewood” in the same script at the Rose Bowl, and at the end each auxiliary member has two flags that are rose colored. Bob Miller told us, “You know they are going to go crazy for y’all at the Band Fest,” the marching show at the Rose Bowl. Our vision for this show wasn’t just our half time show, it’s for the Rose Parade.

What was your first impression of the Homewood band when you were interviewing for the job in 2006?

Not being familiar with Alabama, I did my research on the Homewood Patriot Band. I realized I remember seeing that band as a kid on the Macy’s Parade. The look of the band is so iconic and so different from everyone else.

What stood out to you when you first saw the band in action after starting in this position?

It modeled a lot of what we were doing with the marching band at Troy State University at the time with entertainment and fun music and crowd reaction. It was next level, almost college level.

What is unique about having a band as big as Homewood’s?

When our kids see our crowd react in the way that they do, it makes them have a lot of pride in what they do. There’s no band our size in the state right now, so the next best thing is to model it after what colleges do. Colleges do a great job getting the crowd riled up in these big stadiums, and that’s what we want to do.

What do you tell friends when they ask you about if you’d ever work at a different school?

Between the community of Homewood and how much the school system supports the kids and what we do with band, there’s no other place to go to that does that. 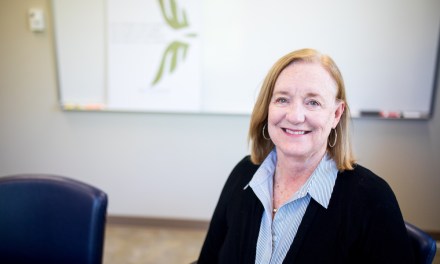 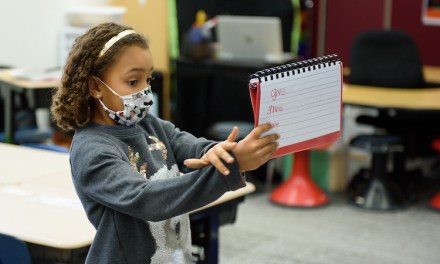 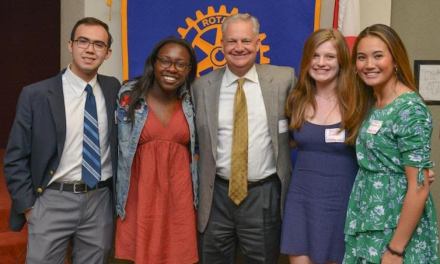 A Man for the Kids 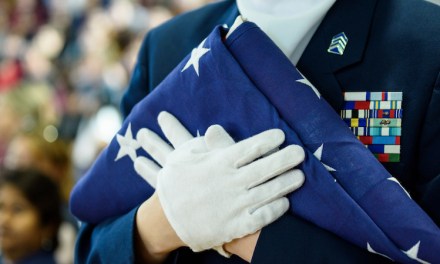